Schooldays in Southwold and Reydon During World War One

About Reydon » Village History » Schooldays During World War One

Schooldays During World War One

An article by Kevin and Anna Whitmee-Haddock April 2014

For the past year we have been doing original research into the lives of children and young people in this area during 1901-1918. This will result in two publications this year, the first of which on the impact of World War One will be published on 1 May. See news item.

This research is based on a wide range of sources including:
• The School Logs of Southwold National Schools and the Reydon Council School
• School Magazines and other material supplied by St Felix School
• Church Magazines and other material supplied by St Edmunds' Church and other churches
• Census materials etc. (National Archives)
• Documents and photographs housed in the Southwold Museum
We have also been helped by local people who have been very generous with their time etc.

The period we are working on was one of significant change with regard to Reydon. Between the two census dates of 1901 and 1911 the population had doubled: it was 971 by the latter date when there were 182 children of school age (5-13). Such was the rise in population that more school places were urgently needed in the district and the new Reydon Council School was opened by the Countess of Stradbroke on 27 April 1908: 129 pupils attended on the first day. By May 1909 there were 168 on roll. The Head Mistress was Miss Agnes Elliott; a road in Reydon is named after her. Unlike Southwold School, Reydon was a mixed school throughout. It was also highly regarded on account of the quality of its accommodation and resources.

There were a number of private schools in Southwold and Reydon at a time when it was thought beneficial for children to be educated in seaside locations. These schools usually received both boarders and day pupils. St Felix School is the only one that remains now. It opened in Southwold in 1898 when it occupied 4 buildings in the town before moving to its current site in Reydon in 1902. It provided a very good educational experience for girls who were drawn from all over the UK. In 1914 there were approximately 100 boarders.

World War 1 had a dramatic impact on the lives of children and young people. In the course of the conflict approximately 450 men from Southwold and Reydon were recorded as serving in the military with obvious implications for their families. More than 10% of these men involved lost their lives. People moved out of the area: by 1918 the number of pupils attending Reydon School had fallen by more than 25%. At the same time, large numbers of soldiers were stationed in the district before their departure for the Front. Henham Hall, home of the Earl of Stradbroke, became a military hospital.

Miss Elliott, the Head Teacher, recorded incidents affecting the everyday experiences of the pupils during these years in the Reydon School Log. Some entries upon which our book is based are given below:

On the night of 15/16 April 1915
‘28 children were absent this morning. This was chiefly due to the Zeppelin raid of last night causing fright among some of the younger children.'

19 April 1916 - officials from the Education Office visited:
‘Mr Runnacles met Mr Webb at the school today to inspect ceilings; some plaster in one room has fallen and that of the Infant Room is very much cracked, as a result of a recent Zeppelin raid.'

24 May 1916 - On Empire Day the programme sent from the Education Office was carried out:
‘The Union Jack was hoisted by the Boy Scouts, and saluted by the children, the National Anthem and suitable hymns were sung, and Empire Day lessons were given. Each room was decorated with flags, and red, white and blue flowers. £1 0s 4d was collected by the children and the teachers for the Overseas Fund.'

October 1916 - the school premises were prepared for emergency use:
‘The Medical Officer and several RAMC (Royal Army Medical Corps) men of the 101st Provisional Battalion stationed at Southwold took possession of the Infant Room early this morning, fitting it up as an Emergency Casualty Clearing Station. Practice was over after 9 o'clock and everything cleared away by 9.45.'

26 January 1917 - effects of shelling from German warships:
‘Only 107 children present this morning out of 160 on the registers. This is due to a bombardment from the sea which took place last night. Many shells fell in Reydon, and several pieces of shrapnel have been picked up in the school playgrounds.'

February 1917 - death of Oscar Burrows, whose brother was also killed in the same month (the names of 7 pairs of brothers are recorded on the Southwold and Reydon War Memorials):
‘The children of the Upper Class together with the Head Teacher left school at 2.40 this afternoon to attend the funeral of Oscar Burrows, an old scholar, who died from illness contracted in the trenches in France.'

8 March 1918 - supporting the war effort:
‘This week a greater effort has been made by the War Savings Association many additional children joining and the subscriptions paid in were much larger than usual. The Association has now exceeded over a thousand War Savings Certificates.'

17 September 1918 - further efforts to support the war:
‘Half holiday given for the purpose of blackberry gathering. This is in accordance with the instructions received from the Education Office. The fruit is being sent to the Ministry of Food Office in Lowestoft by motor bus to be made into jam for the soldiers. On 24 Sep the children were given a half holiday on account of their efforts.'

The school magazines of St Felix provide an excellent record of the way the war was experienced by its pupils and also recount the exploits of former pupils who were on active service. Felicians served as nurses and ambulance drivers in a wide range of countries, including Russia, and ran a ward in a military hospital in London. 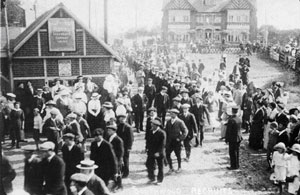 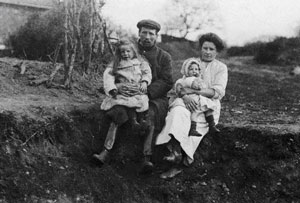 This picture shows a family sitting on the edge of a bomb crater in Reydon following a Zeppelin raid. (Barrett Jenkins Collection) 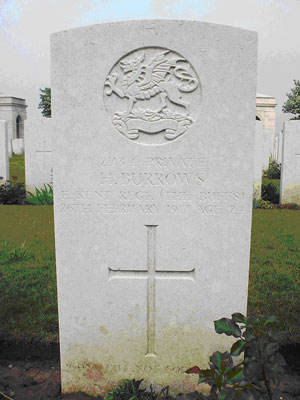 This picture shows the grave of Oscar Burrows' brother in France. His name appears on the War Memorial in Reydon Churchyard alongside Oscar's. (Picture supplied by Dr John Greenacre) 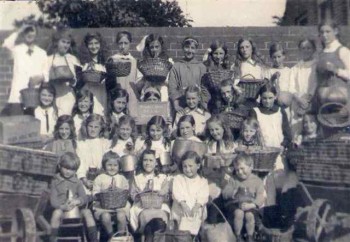 Details from the Reydon Council School Log (1914 - 1919) have been extracted by Kevin & Anna Whitmee-Haddock from the Log kept at the Suffolk Record Office in Lowestoft. We are very grateful to Kevin and Anna for giving us permission to use their work. Please click here to read the log.