Reydon was probably named by the Danes; the name means ‘the uplands on which the rye grows'. Reydon is listed in the Domesday Book, (a land survey from 1086), when it had a population of about 300 and in comparison with neighbouring villages was distinctly ordinary, apart from in its sheep population which was above average! In the 15th and 16th centuries the village was known as Reydon St Margaret, after the village church. This was to avoid confusion with the village of Raydon near Ipswich. 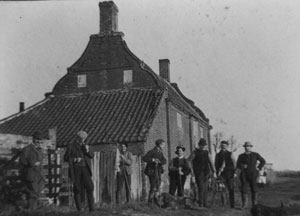 Shooting party outside Quay Inn in 1895

Reydon had its own quay, the first of which probably fell into decay in the 13th century. In 1737 a new quay was built. This enabled cargoes to be unloaded further up the river Blyth, therefore avoiding dues at Blackshore. The Quay Inn (later Quay Cottage) had a causeway right down to the shore and was reputed to be a smugglers haunt. Old photographs clearly show ‘smugglers windows', two small windows in the gable end of the Inn. A light shining in these windows meant that it was safe to bring the goods ashore.

On Reydon Corner stood The Bear Inn, (now Bridge house) built probably around the middle of the 18th century. In 1825 an exceptionally high tide flooded the ground floor right up to the door and a boat had to be used to carry the customers on their way. On at least one occasion, and probably there were many, the Bear was used to store smuggled goods bought up the Blyth.

Much of the housing in Reydon was built after the Second World War. The soil removed from the site where bungalows were built on the Lowestoft Road was used to build up the bank that runs along the A12 at Blythburgh. Further development has followed and the village now has a thriving population.

For a more detailed history of the village, please refer to the book ‘The Village where I went to School' by David Moyse. This book is sold in the local shops. We are very grateful to him for allowing us to quote from his book for the purposes of this article.